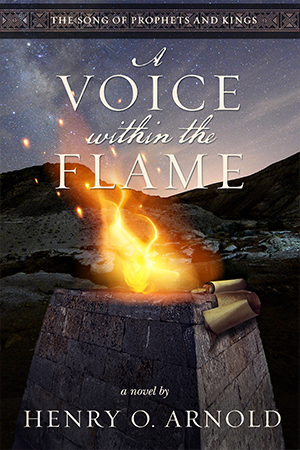 A Voice within the Flame

The Song of Prophets and Kings, Book 1

A son of the vow…a voice for a nation

For many long years, Hannah prayed for a son; a son finally granted to her only when she promised him back to God. Samuel, son of the vow, grows up in the Tabernacle, his childhood spent in the company of priests and Levites, in service to a God who was always silent. Samuel watches in dismay as the sons of the High Priest flaunt their wicked behavior, yet he knows that Yahweh will eventually have a reckoning. It is not until he hears a Voice call to him from within the flames of the altar that he realizes he has a part to play in this drama.

This young man hears another voice from a maiden who captures his heart, and he begins to dream of a future beyond the confines of the Tabernacle. But when Israel’s enemies threaten to destroy his world, it appears as though everything Samuel ever held dear may come tumbling down around him.

Not even a great prophet, whose words never fall to the ground, can keep Israel from crying out for a king. The Lord calls upon Samuel to guide the nation and her new king through the years of turmoil they must face.

In this tale of triumph and scorn, deepest love and burning rivalries, the new epoch is given a voice…and it is a Song of Prophets and Kings.

Also by This Author