From the Publisher's Desk

Why do some things “land” emotionally and others fall flat?  So often we hear about our culture being desensitized to many things.  Violence, language, sex.  The list goes on.  I’m convinced that’s true.  But there are other times where even the most desensitized to things are affected profoundly, and I struggle to understand why.

Was that scene more shocking than another?  Not necessarily.

In looking at what makes a story “bad” (meaning it doesn’t feel “true”) I’m starting to believe that some storytellers have spent their time giving us counterfeits rather than the real thing.  As writers we know what emotion we want our audience to have at a particular moment so we give them something to evoke that feeling.  But did we give them the real thing?

I feel like we get this often when it comes to good things.  We replace joy with happiness.  Its not necessarily a counterfeit, but it’s maybe not the emotion we were looking to evoke, and it doesn’t seem quite right.

I think the same is true for all these “bad” things.  Lots of storytellers use violence and language for their shock value.  Counterfeits work great here since your goal isn’t a deep emotional resonance.  Counterfeits tell your audience how to feel – they don’t encourage them to feel it with the characters.

A wise piece of advice was given when it came to audience interaction said that the audience doesn’t need to know (what’s happening, how to feel etc.,) it needs to wonder.  Similarly, I was also once told, in regard to suspense stories/scenes, that it wasn’t about shock but rather about dread.

Counterfeits tell us what we need to know and shock us.  They don’t fill us with wonder and dread.  That’s why they’re counterfeit. They take away our reactions as an audience.

While we are becoming (and largely have become) desensitized to devices like shock, I wonder if it’s even possible to become desensitized to wonder and dread.  Those live inside us.  They’re natural.  We can’t live without them.   This also means that if you want to evoke an emotional reaction, you don’t have to shock your audience.  You have to get them to feel it (along with the characters).  If you have a character death in your story and you want to shock the audience with it, take a step back.  Is that the reaction you want?  Let them decide how to react.  Don’t worry about showing them something they’ve never seen before (at this point we’ve seen it all, right?) let the audience’s imagination run wild.  They’ll make something up that’s even more shocking than you could imagine.

And this way, above all, is how you affect your audience deeply.  If you want to change them, let them participate in the process.  I’d also like to stress that when I say “counterfeit,” I don’t mean that something isn’t true to life.  Sometimes things that are true to life fall flat in storytelling – I don’t know why.  What affects us while we’re engaged in a story is fundamentally different than how it affects us when we’re living our story.  Don’t confuse realism with authenticity.  What matters is that the emotions are real.

If you want to change the world through story, if you want to “land” that emotional scene, don’t try to shock us.  Make us wonder.  Make us dread.  Let our imaginations do the work for you.  The audience is your partner.  Don’t give us counterfeits.  Only the real thing can effect great change.

I started thinking about this topic for two reasons.  The first was reading a blog post about becoming desensitized by media.  I absolutely think this is happening.  We can talk about news and real-life events being shown to us on a daily basis.  I think that’s an important discussion.

But so often I think that our reaction – particularly in fiction, television, and movies – is “meh.” Not because we’re desensitized, but because we’ve seen it before and it didn’t affect us.  It didn’t make us wonder or dread or even try to use our imaginations.  I literally couldn’t be bothered. 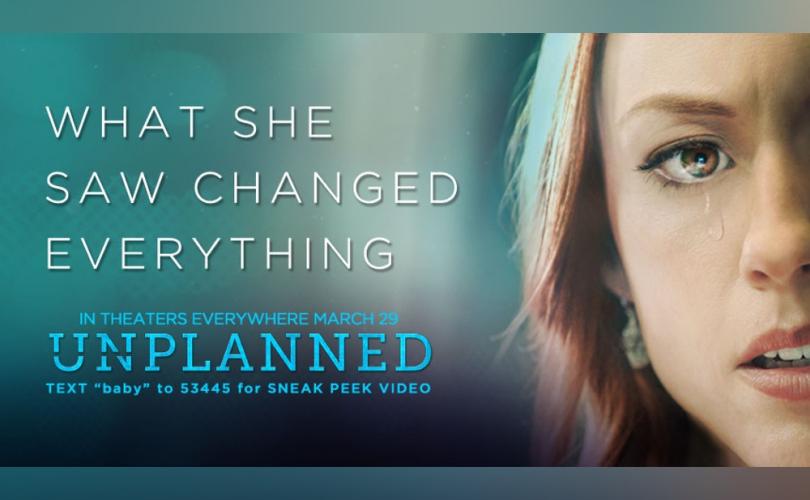 Then I saw the new movie (or should I say film?) Unplanned.  I was prepared to be shocked.  That was, after all, what all the hype was about.  But shock isn’t what I got.  I got dread.

I was expecting to be told what was happening – to watch the character develop and culminate in her seeing the abortion of a child on a monitor.

The best thing the filmmakers have done is set us up knowing that this scene was in the film.  (I hope in the home video versions they have a warning at the beginning to set it up.)  I was expecting it to be toward the end.  I was expecting to follow Abby through her journey to that moment and be forever changed.  But Abby’s story wasn’t the one that mattered. Our story – the audience’s – was.

So we start with that scene.  With no time to prepare yourself with story or character development.  Boy, does that front-load the dread.  The whole scene is set up in such a way as to build this tension, and it doesn’t’ stop.  From there on everything in the film is predicated on this scene.  Everything you see – everything you feel.

The writers (I believe Abby herself wrote the basic form in her book by the same name) added every scene to keep up this audience reaction.  By skipping around in time a bit and telling the end first, then Abby’s story, we’re constantly in wonder about how she got there  and in dread because we know its not over.

When I’ve told people about this film, I’ve described it this way: “It’s one of the worst things I’ve seen – you should see it.”

Both are true.  I believe that the reaction that the writers were looking to evoke was disgust and sadness at the abortion industry.  I think they nailed it – in that it’s truly terrible,in the most classic sense of the word.  Maybe that’s what I meant when I say “worst.”

Interestingly, at the same time and by starting the story where they do, they manage not to make us hate Abby.  We get to experience the dread with her.  We then get to experience her life.  It makes us empathize with people like her – those that have had abortions and (at least some) of the people who work in the clinics.  We’re on their side.

At least for a while.  We do get a hint of darkness in Abby, but I think we need this too.  The message is “if you don’t turn away from evil, this is what it makes you.”  Abby doesn’t like what she’s becoming.  It gives the audience a choice – asks us a question. “Is this who we want to be?”  Her answer is complicated and takes some time.

And I think that all these things add up to a truly authentic story.  Does it matter that it’s a true story – that it really happened?  I don’t know.  It takes some of the sting of the counterfeit away, knowing its true.  If it was pure fiction, I suppose it could be dismissed.  Regardless, the storytelling principles remain the same.  They could have told the same, true story in a different way and still counterfeited us, the audience.  They didn’t.  I’m thankful for it.

I’m still troubled by the question of who should see this.  I know that most adults should be able to handle it.  But when you’re messing with the audience emotions, you’re playing with fire.  I’m further hindered by my own emotional reaction.

Should my 13-year-old daughter see it?  I don’t think so.  Maybe that’s me being over protective.

But again, I don’t think so.  Do I want to fill her with that kind of dread?  In the end, the story’s one of redemption and light, and I don’t think you can have that without some element of sin and death.  I’d rather fill her with compassion.  Compassion for those who have experienced things like Abby did – for the children lost.

But the overwhelming emotion the audience feels is pain, sadness and dread.  Even the ending – even knowing it in advance – is tinged with just a bit of that dread and thinking, “Maybe this doesn’t go so well after all.”

So even with all the complaints about the MPAA’s R rating, I think they did us a service (and not just for the film’s PR).  This is something we need to think about before going to see it.  To know it’s going to affect us.  If that rating had been PG-13, a lot of people would have gone without thinking about it, and this is a film deserving of consideration both before and after viewing.

So use your judgement.  I stand by my statement (with some small corrections): “This is a terrible film.  Everyone should probably see it.”